Cypress is an unincorporated community in Harris County, Texas, United States located completely inside the extraterritorial jurisdiction of the City of Houston. The Cypress area is located along U.S. Highway 290 (Northwest Freeway) is twenty-four miles (35 km) northwest of Downtown Houston. The Cypress urban cluster ranks 50th in the top 100 highest-income urban areas in the United States.

Large scale residential and commercial development beginning in the 1980s transformed the once rural area into one of the Houston area's largest suburban communities.

The recent find of a San Patrice projectile point at the Dimond Knoll site nearby on Cypress Creek attests to a human presence in the area by 7500 BC. By the early historic era, the area around present-day Cypress was populated by Atakapa and Akokisa Indian tribes, but they soon disappeared after the appearance of German settlers in the 1840s;[1]

The German heritage is most notably reflected in the names of some of the major thoroughfares of the area, such as Huffmeister and Telge Roads.[2] General Sam Houston and his Texas Army camped in the area on March 22, 1836 on the way to Harrisburg, which is now in East Houston, just days before the Battle of San Jacinto.[3]

The area remained mostly rural until the early 1990s when developers began construction of several master-planned communities. The area is often referred to as Cy-Fair or Cypress-Fairbanks, which comes from when the Big Cypress School and Fairbanks High School combined in the 1930s to form Cy-Fair High School and the Cypress-Fairbanks Independent School District.[4] In March 2008, the Cypress Historical Society (CHS) was formed as a non-profit corporation with its primary mission being "...to discover, educate, promote, collect, preserve and make available to the public, historical documents and artifacts of the Cypress area".[5] The CHS organization holds regular events aimed at exposing Cypress' residents to the historical and cultural foundation upon which the area was built.

Cypress is located near the intersection of US Highway 290 and Spring-Cypress Road. Cypress is located within the Cypress Creek and Little Cypress Creek watershed. There are no official boundary lines for the exact area, but roads commonly mentioned to bound the area include FM 529 road as the southern border, HWY 6 and FM 1960 as the eastern border, and HWY 249 as the northern border.

Cypress has two distinct geographic profiles separated by Highway 290. The area northeast of US 290 is forested and thickly wooded, while the area southwest of 290 is predominately ranch land and grassy prairie dotted with scrub brush, Live oaks and Post oaks.

Cypress falls under the jurisdiction of Harris County Precincts 3 and 4 (separated by Cypress Creek).

Major arteries include Highway 290 to the South and State Highway 249 to the east.

The climate in this area is characterized by hot, humid summers and generally mild to cool winters. According to the Köppen Climate Classification system, Cypress has a humid subtropical climate, abbreviated "Cfa" on climate maps.[6] 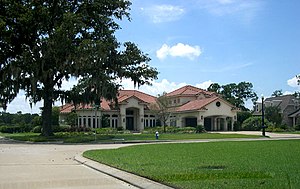 Blackhorse Ranch is a golf course community in Cypress

In 2010, Sysco announced that it purchased the former Hewlett Packard call center along U.S. Highway 290 in Cypress and that it would establish a shared services facility for its distribution centers in North America.[13]

Cypress is served by Cypress-Fairbanks Independent School District, the third largest school district in the State of Texas and one of the fastest growing in the United States. CFISD serves nearly 107,000 students as of 2010.[14]

Windfern High School offers an alternative path toward graduation for accepted students from the above high school attendance zones.

Cypress Christian School, a K–12 private school, is located in the area.[15]